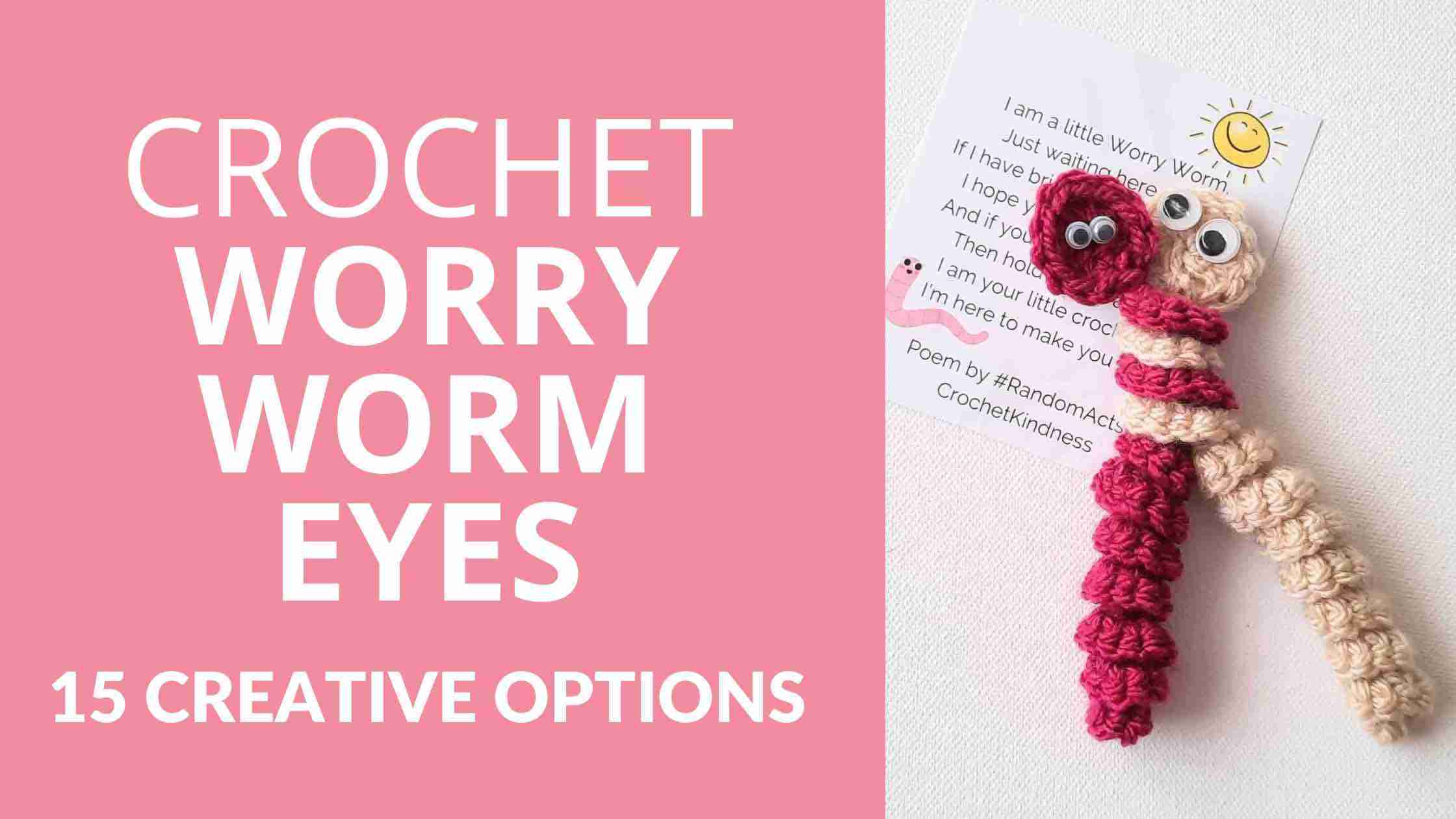 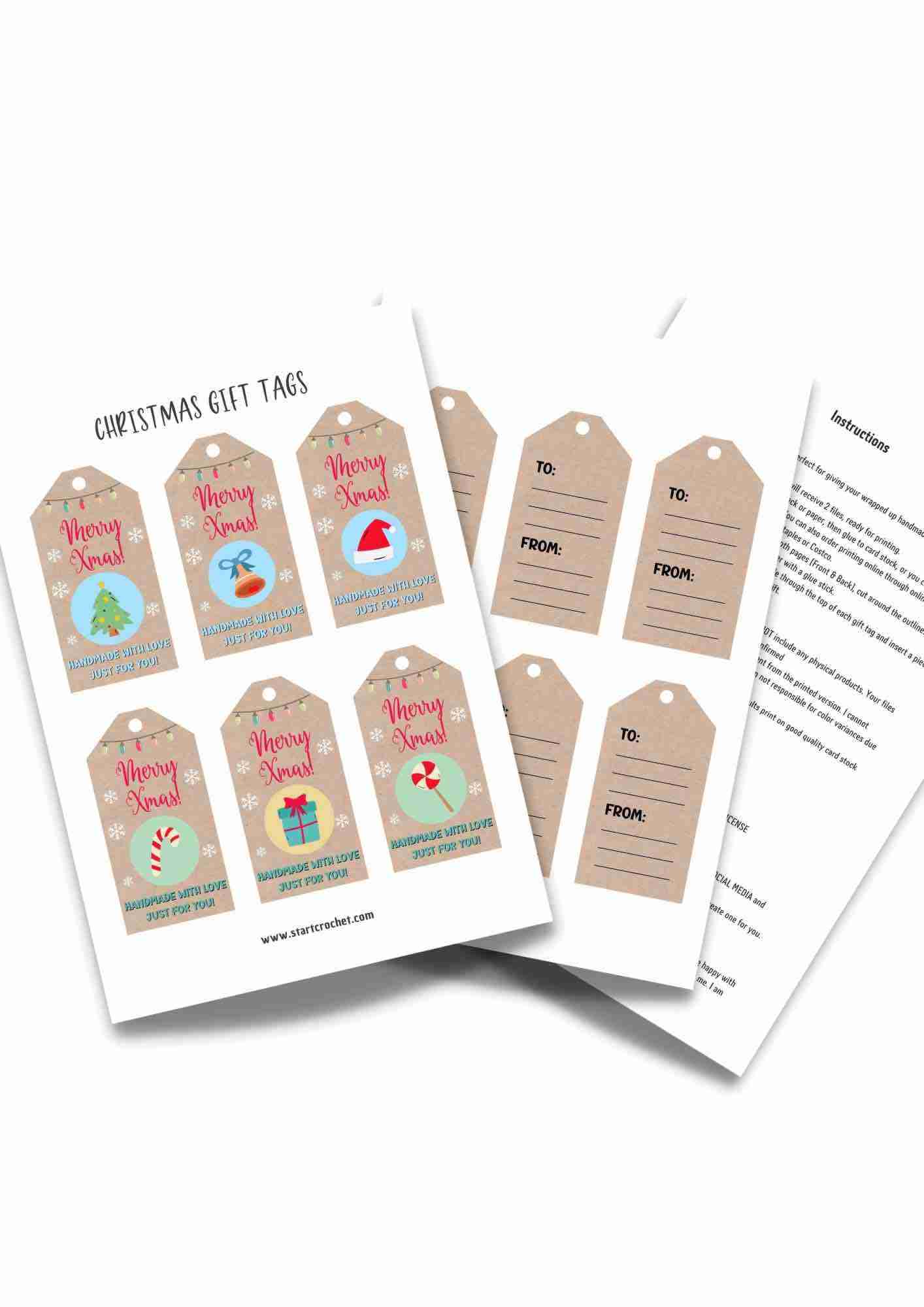 Are you as addicted to crocheting worry worms as I am?

I don't know what it is about these little creatures, but I just love making a ton of them to give away as Random Acts of Crochet Kindness, or to people who I feel could need a hug from time to time.

If you're looking for a basic worry worm pattern, here's a FREE Worry Worm Pattern + PDF Downloadable for you. 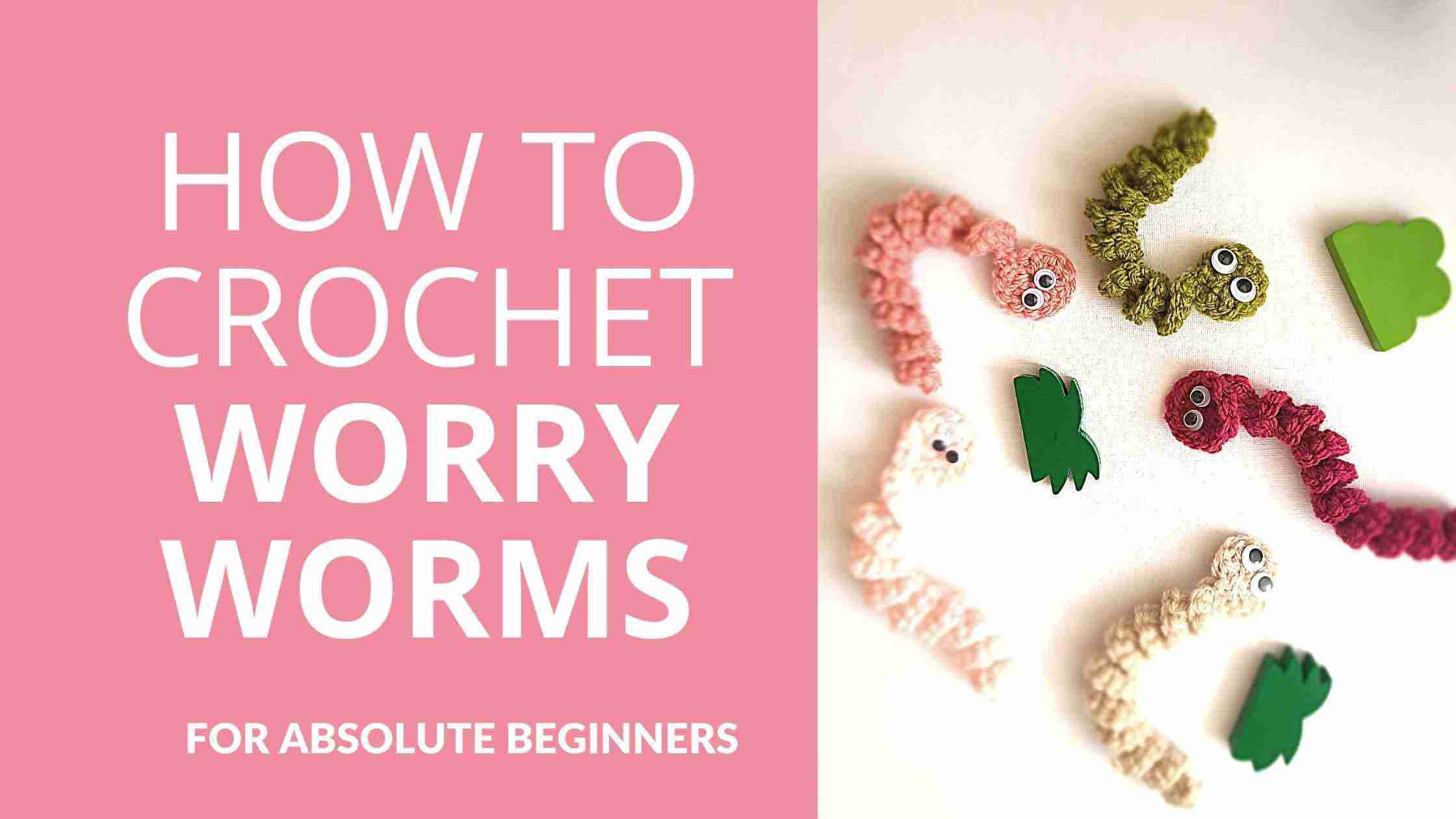 After I've crocheted some worry worms, adding some eyes makes them come to life!

The problem is, though, that I "worry" sometimes that little kids will find them. So I try to make those worry worm eyes as safe as possible for kinds under 3 years old.

The most popular eyes for worry worms are goggly eyes. These are either stick-on ones or some people also glue them on for extra hold.

I looked around for some other options and thought I'd make a list of what I found that could be helpful to you as well.

Have a look at the 15 options below and choose your favorite.

And once you're done with your worry worms, you might want to add a worry worm poem tags. Here are some pre-designed ones you can print out on your printer. 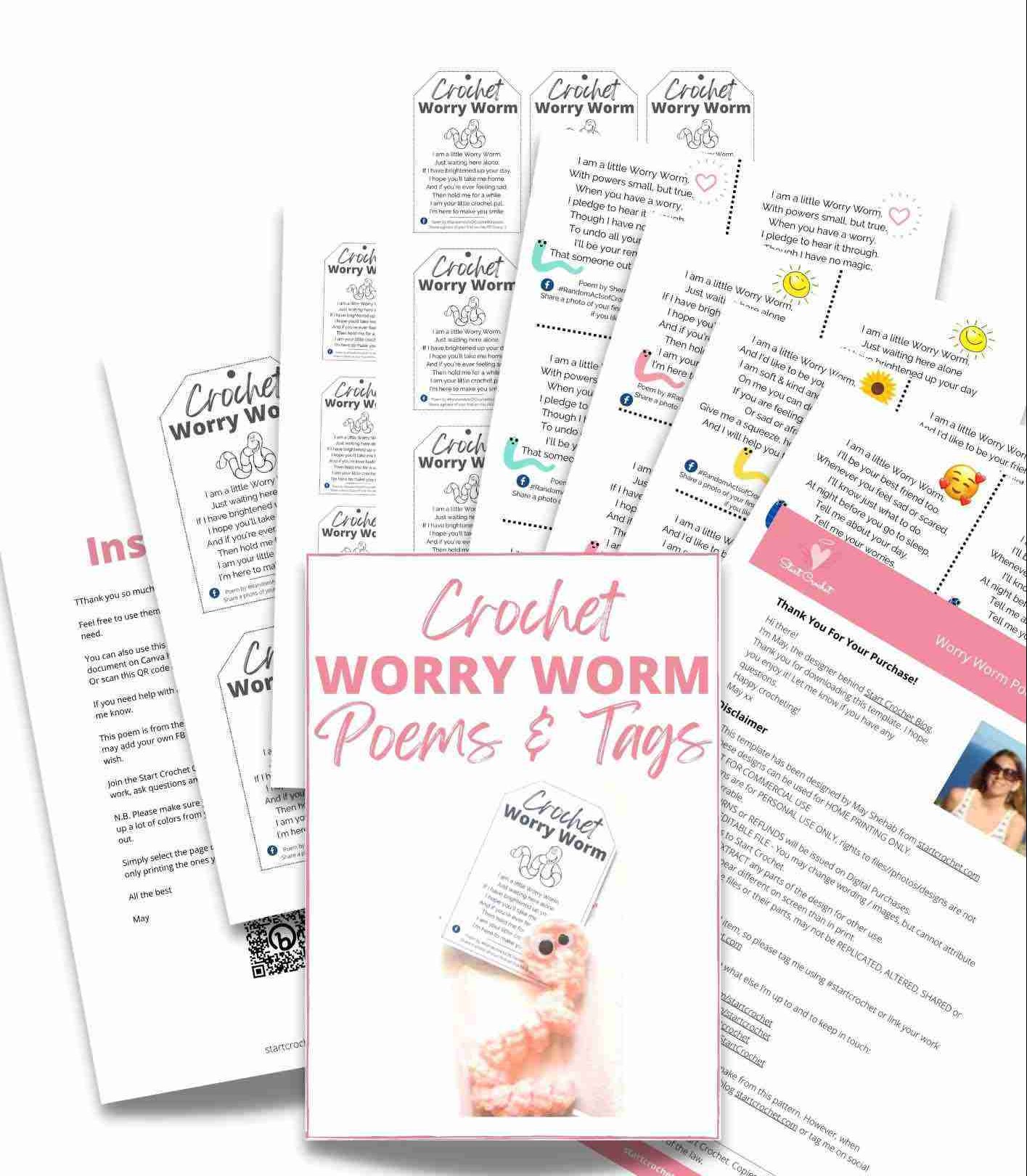 Disclaimer: This post contains affiliate links, which means I receive a small commission, at no extra cost to you, if you make a purchase using the Start Crochet links. Please see my disclosure for more details.

If you're crocheting these for younger children under 3 years old, or you're hiding them out & about for people to find, you'll want to make sure your worry worm eyes are safe and don't come off if the baby / toddler holds them.

Here's a list of Worry Worm Eye options for you to choose from: Stick-on goggly eyes are the most commonly used as Worry Worm eyes. They come in large packets, so they're ideal if you're making lots of worry worms. They're also super easy to attach. You simply peel off the sticker paper in the back and stick them onto your worry worm's face. These goggly eyes are not suitable for children under 3 years old.

These eyes are similar to the regular goggly eyes, except they have eyelids & eyelashes painted on them. You get 100 eyes per packet and they come in a variety of sizes, of which the smallest is 7 mm and the largest is 15mm. 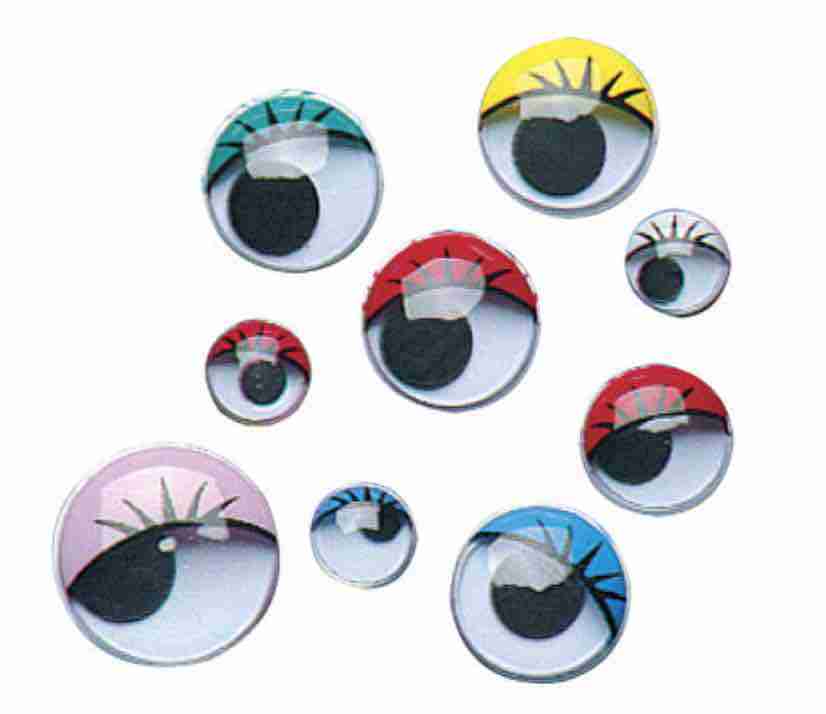 Keep track of your crochet projects with these printable sheets. 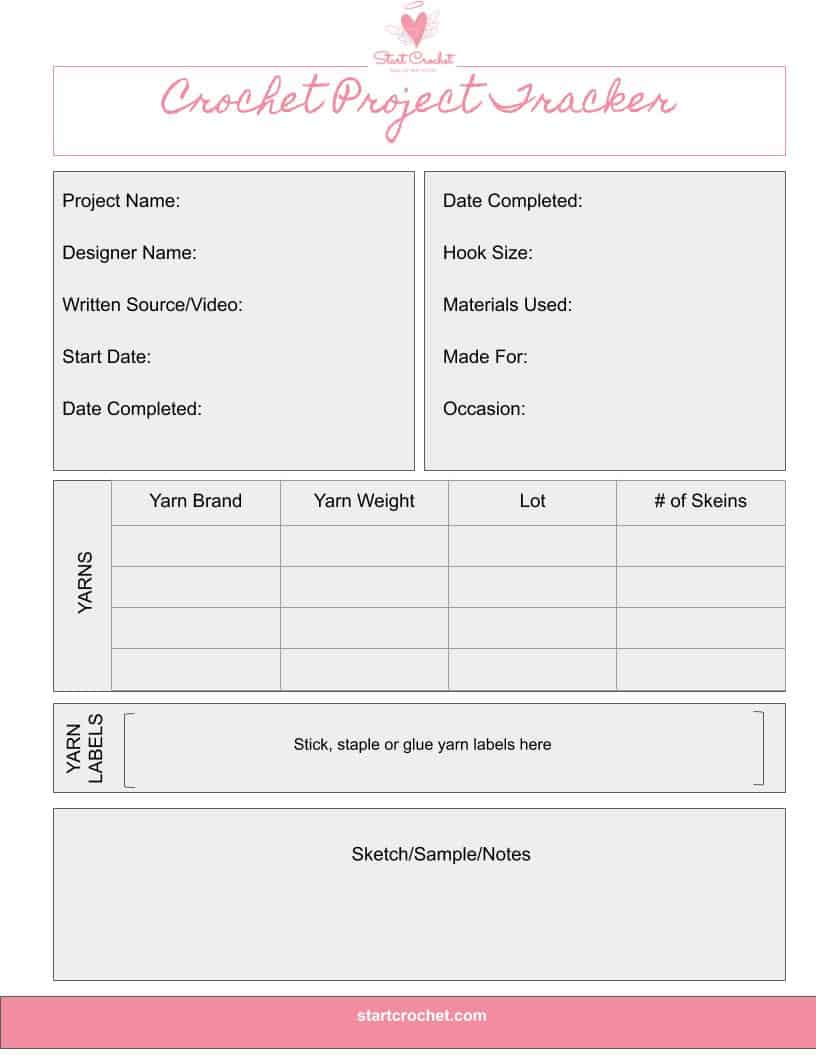 Sew-on goggly eyes are great for worry worms because they look really cute and you can sew them onto your worry worm face with thin thread and a sewing needle. They won't come off if a child under 3 years old handles your worry worm, so this is definitely a safe option. 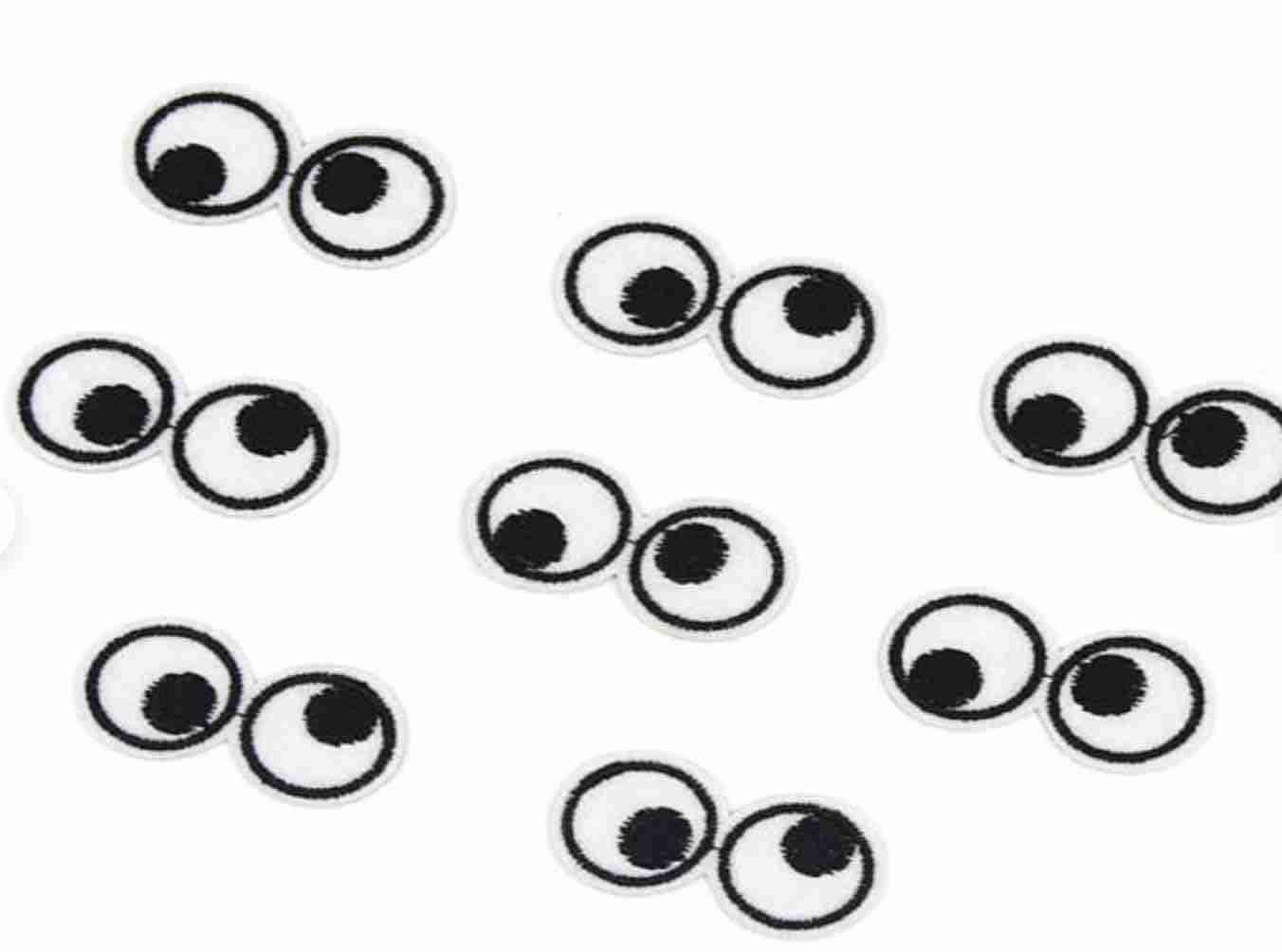 Sew-on beads also come in large quantities so they're ideal if you're making lots of worry worms.

These will make cute little eyes for your worry worms and you can sew them on safely for young children under 3 years old. 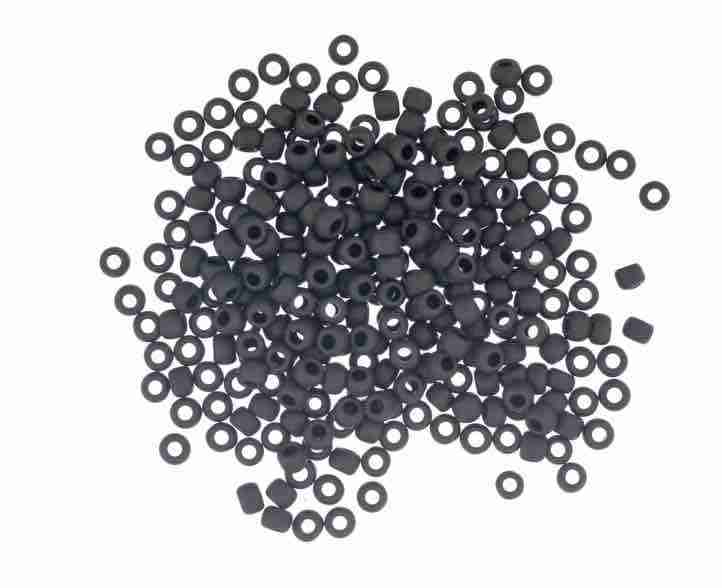 Another option would be to use some black (or black & white felt.

You can cut out small circles (the black circles smaller than the white ones), then either glue them onto your worry worms, or even better, would be to stitch them on your worry worm faces with some thread. 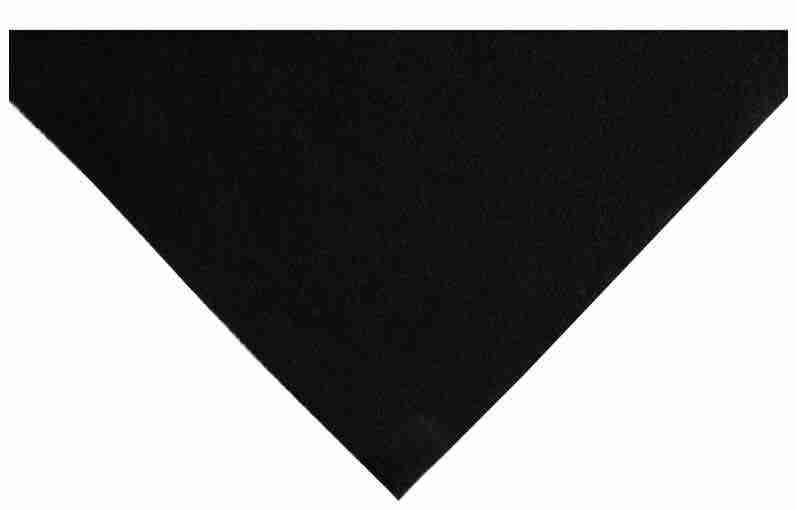 Or you could purchase ready-cut circles that you would just glue onto your worry worm. Make sure to order the size you are aiming for. 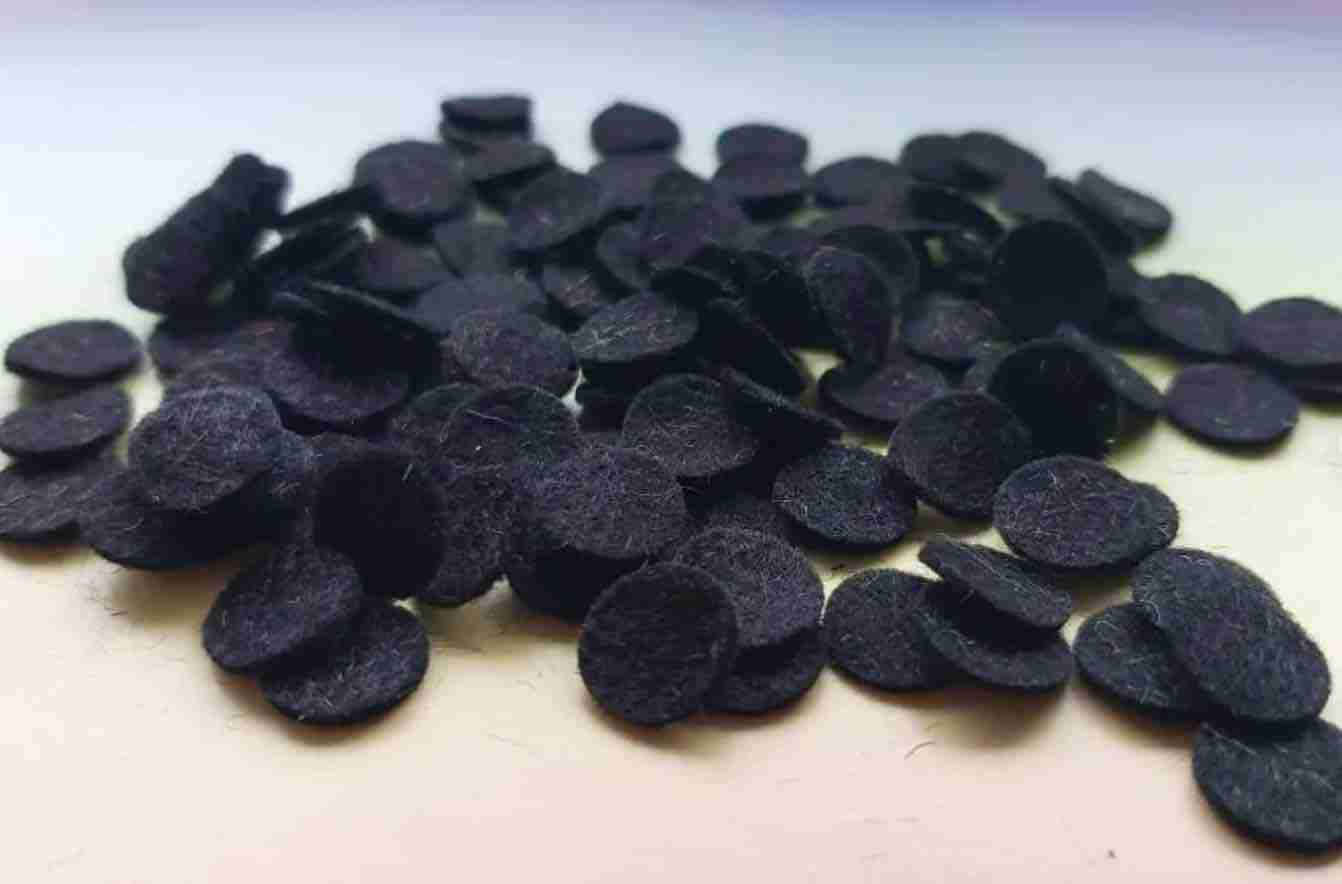 I think this is actually the easiest and safest option. You can just draw some eyes onto your worry worm's face using a Sharpie Fabric Marker. 2 small circles will do the job, but if you want to get fancy, you can draw some more detailed eyes. 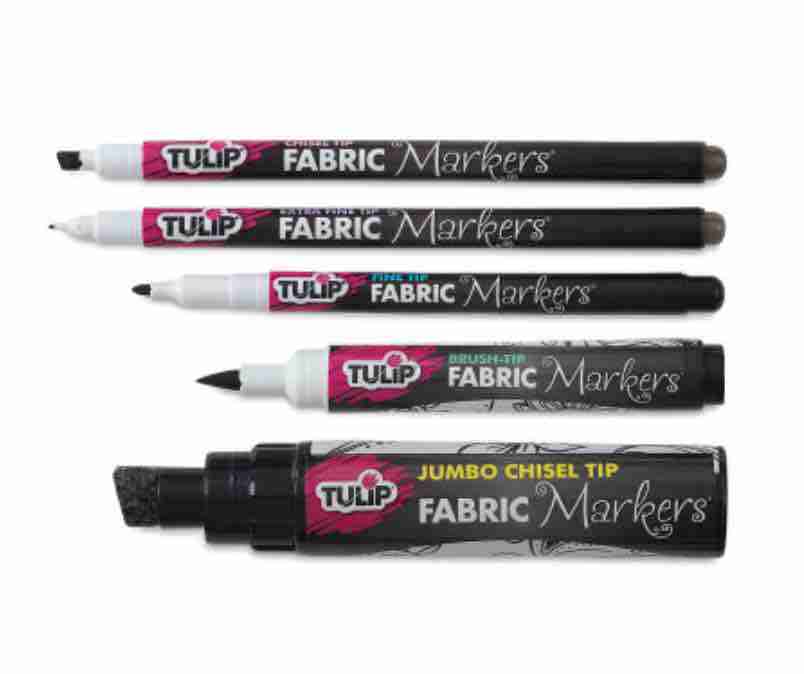 These are cute little sew-on buttons that could definitely be used as worry worm eyes.

If you don't want your sewing to show from the back of your worry worm head, just make sure you catch the front loop only of your dc stitches when attaching the buttons. 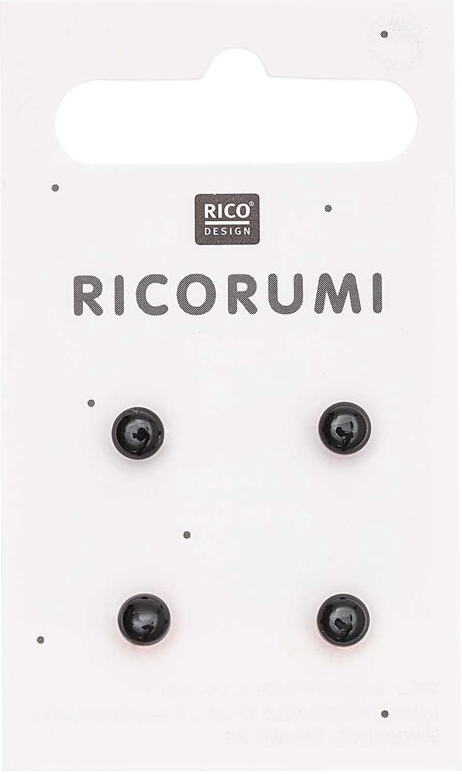 Adding a French Knot with some black yarn is also a safe option for kids under 3 years. You could even embroider a mouth for your worry worm.

If you want to learn how to embroider a French Knot, have a look at this video tutorial below.

Note: Your stitches will show in the back of the worry worm's head, so what you could do to avoid those back stitches being seen is to crochet another head (circle) of the same size and whip stitch the 2 heads together all around. 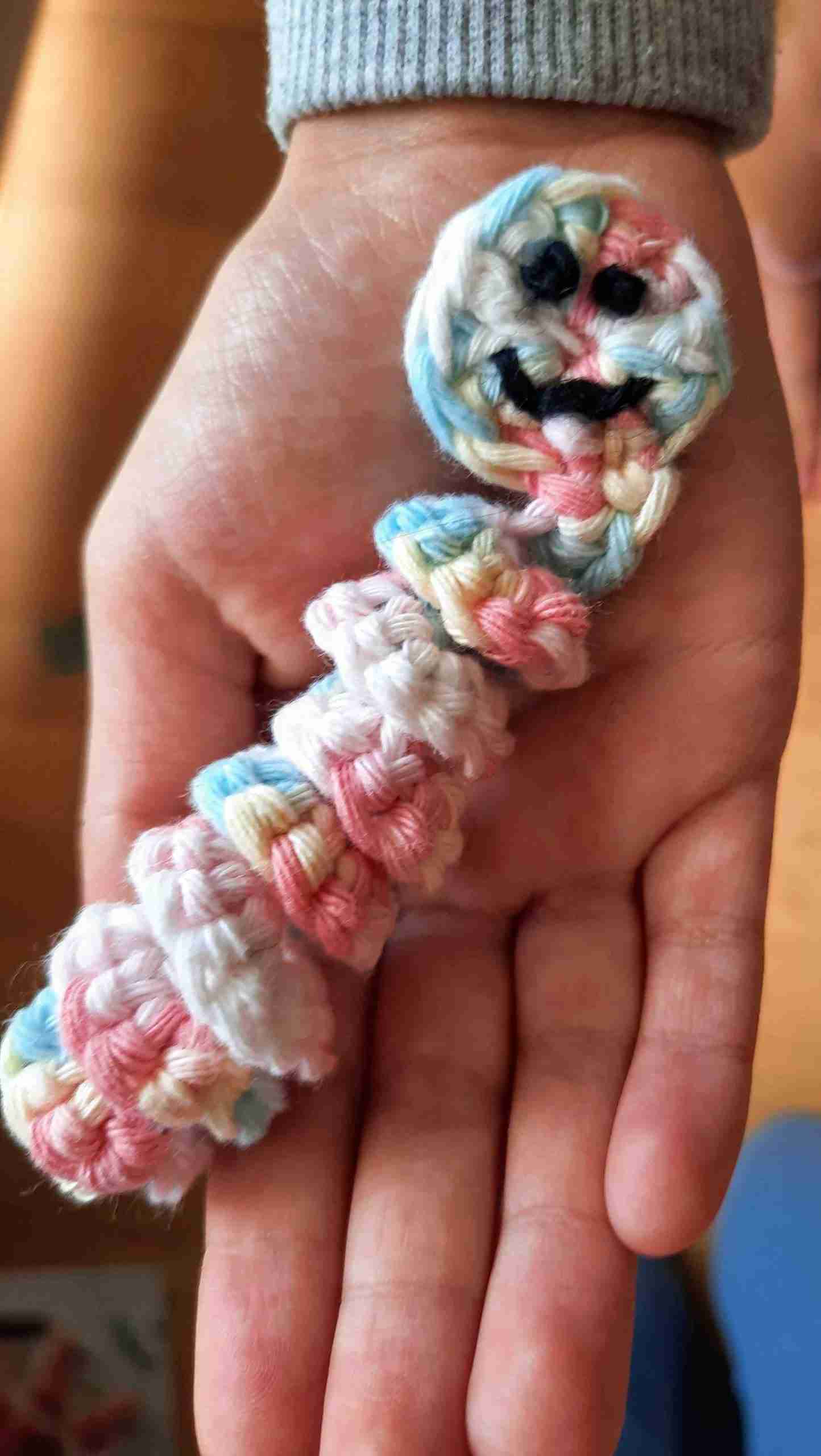 The colonial knot is another embroidery knot that's similar to the French Knot, but is a little smaller than the French Knot. Some people feel it looks neater and more even. Try out both and see which you prefer.

10. Small crochet circle of one round

Using very thin yarn or thread, you could crochet two circles of one round each to create your worry worm eyes. To make these, you could either ch 3, then join with a slip stitch or work 6 sc into a Magic Circle, leave a 6" tail, cut yarn and fasten off. You can then use the 2 yarn tails to attach the eyes to your worry worms with a darning needle. chain 3, join with a slip stitch

A Permanent Marker Pen is also one of the easiest and safest options. Simply draw some eyes onto your worry worm's face using a Sharpie Permanent Marker. 2 small circles will do the job, but if you want to get fancy, you can draw some more detailed eyes.

Toy eyes are an option for worry worms, but in this case you'll have to add another crochet circle behind the head) or crochet your worry worms with a 3D head (amigurumi style). I used these eye in my Pumpkin Worry Worms and I think they look really cute! 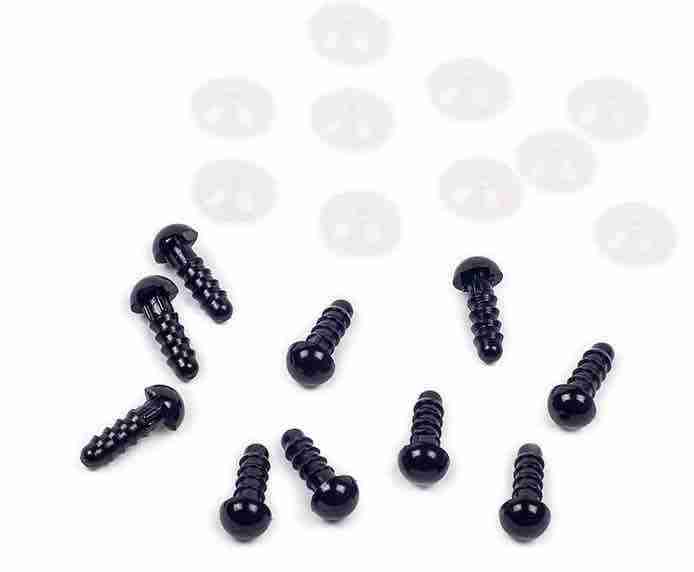 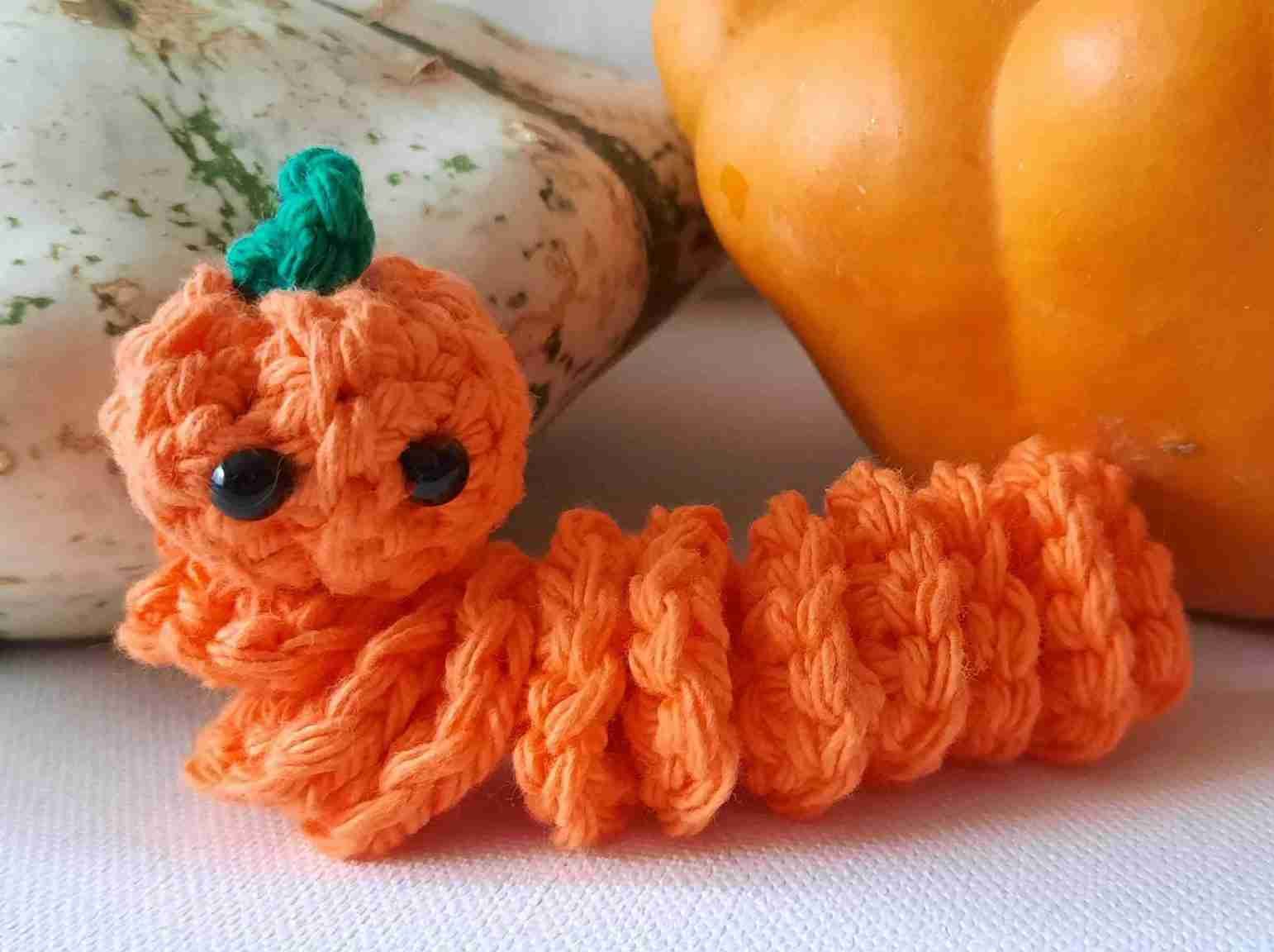 Another simple option, but not safe for younger children under 3 years, is to attach small black pompoms with some fabric fusion glue. This gives a cute look as well.

How about a couple of drops of black glue? You have to be careful with this to make sure your dots come out right, but it's definitely doable.

This is a specialty air-dry rubber compound I normally use to make crochet slippers non-slip. You can get it in various colors, so if you use black, you could also put 2 drops on your worry worm's face for eyes. As you can see, there are many options for crochet worry worm eyes. Depending on your needs and preferences, you can choose any of the 15 eye varieties mentioned above to make sure your worry worm ends up looking exactly how you want it to.

Which option will you choose?

Let me know in the comments below which on you decided to choose and why you feel that's the best option for you.

There are so many different types of worry worms. Here's a Halloween-themed worry worm that might interest you: 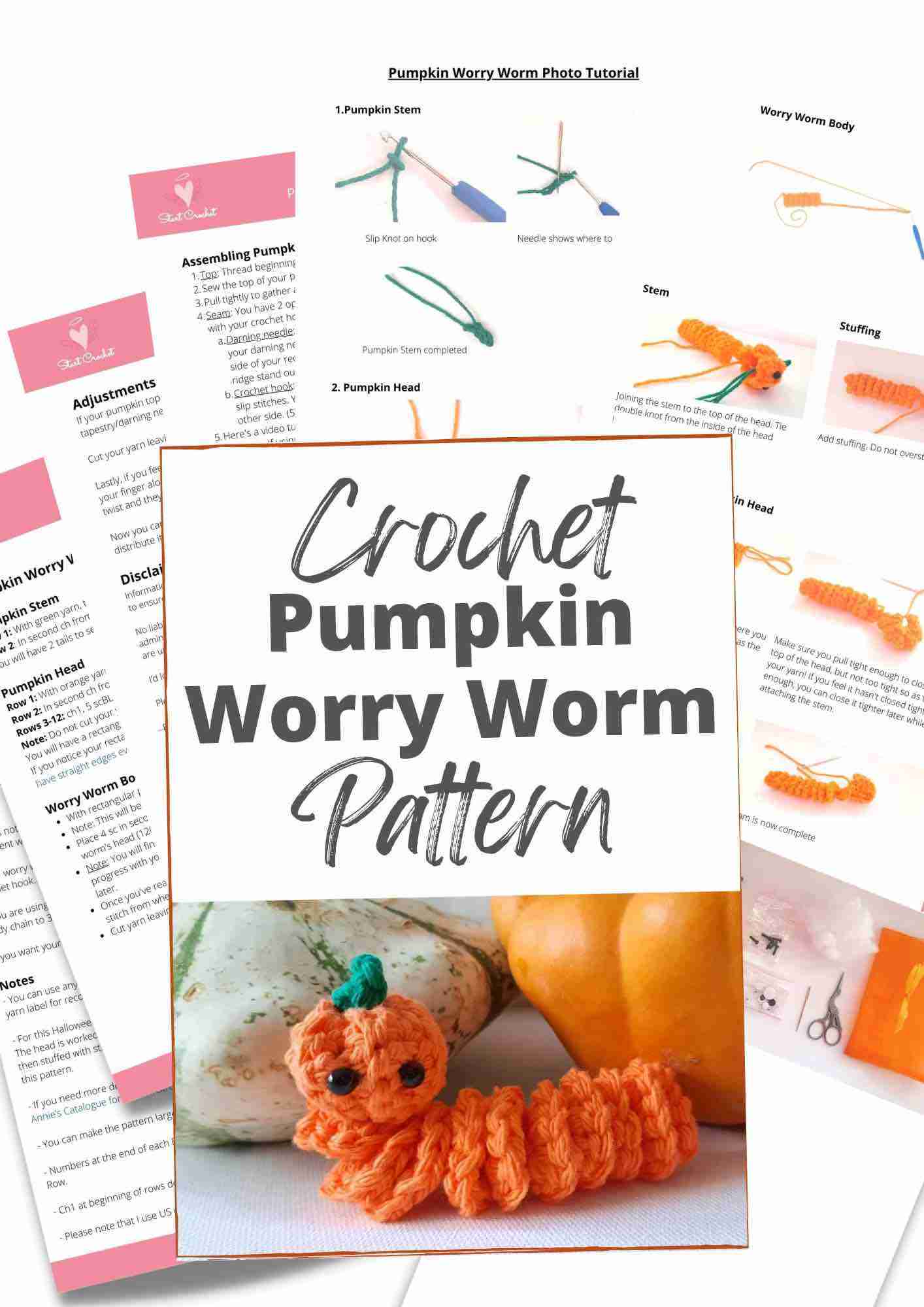 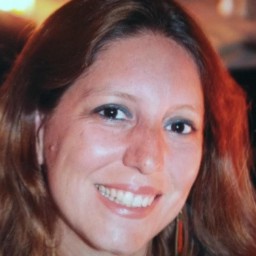 Hi. I'm May! Welcome to my Blog! Here you'll find crochet tutorials and easy crochet gift ideas you can offer your loved ones on special occasions. You'll also find little crochet designs you can use for Random Acts of Crochet Kindness (RAOCKs) to help make the world a happier place for everyone. 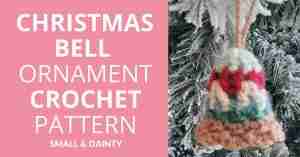 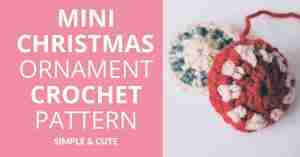 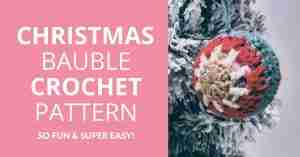 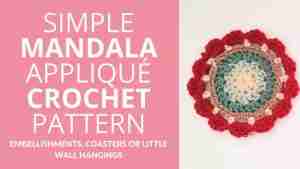 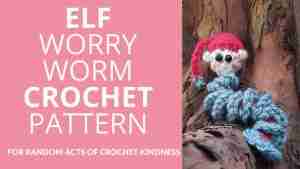 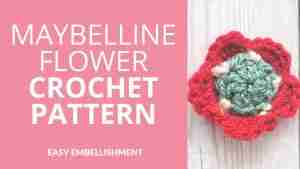 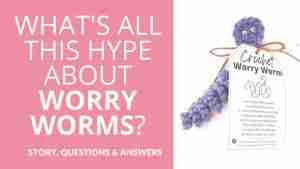 What’s All This Hype About Worry Worms? Story, Questions & Answers 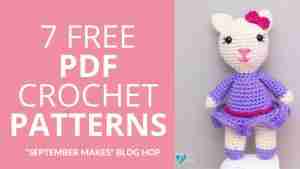 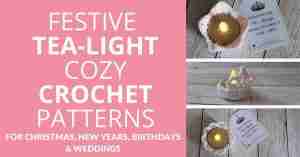 Please log in again. The login page will open in a new tab. After logging in you can close it and return to this page.

We use cookies on our website to give you the most relevant experience by remembering your preferences and repeat visits. By clicking “Accept”, you consent to the use of ALL the cookies.
Do not sell my personal information.
Cookie SettingsAccept
Manage consent

This website uses cookies to improve your experience while you navigate through the website. Out of these, the cookies that are categorized as necessary are stored on your browser as they are essential for the working of basic functionalities of the website. We also use third-party cookies that help us analyze and understand how you use this website. These cookies will be stored in your browser only with your consent. You also have the option to opt-out of these cookies. But opting out of some of these cookies may affect your browsing experience.
Necessary Always Enabled
Necessary cookies are absolutely essential for the website to function properly. These cookies ensure basic functionalities and security features of the website, anonymously.
Functional
Functional cookies help to perform certain functionalities like sharing the content of the website on social media platforms, collect feedbacks, and other third-party features.
Performance
Performance cookies are used to understand and analyze the key performance indexes of the website which helps in delivering a better user experience for the visitors.
Analytics
Analytical cookies are used to understand how visitors interact with the website. These cookies help provide information on metrics the number of visitors, bounce rate, traffic source, etc.
Advertisement
Advertisement cookies are used to provide visitors with relevant ads and marketing campaigns. These cookies track visitors across websites and collect information to provide customized ads.
Others
Other uncategorized cookies are those that are being analyzed and have not been classified into a category as yet.
SAVE & ACCEPT