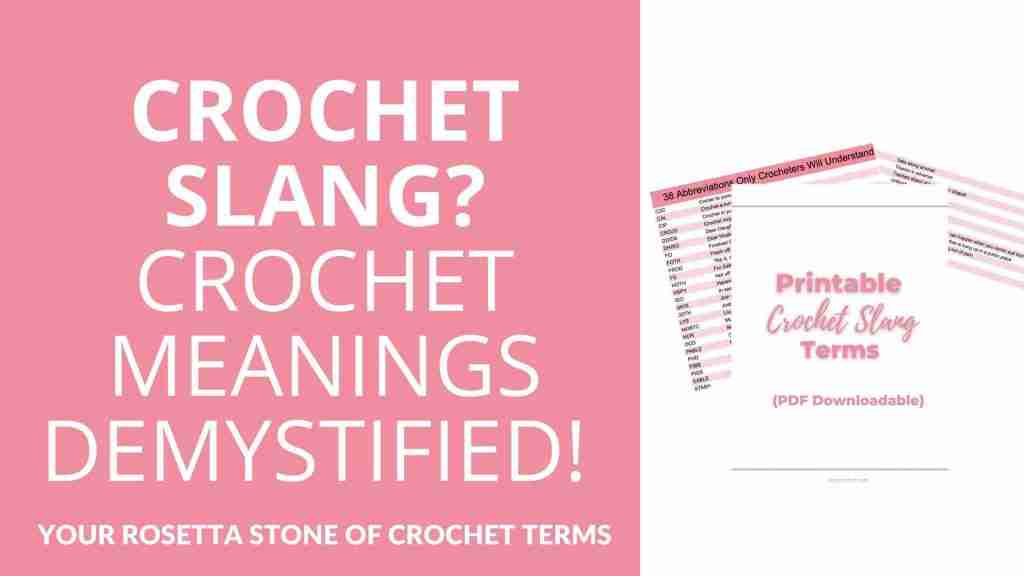 in Learn To Crochet 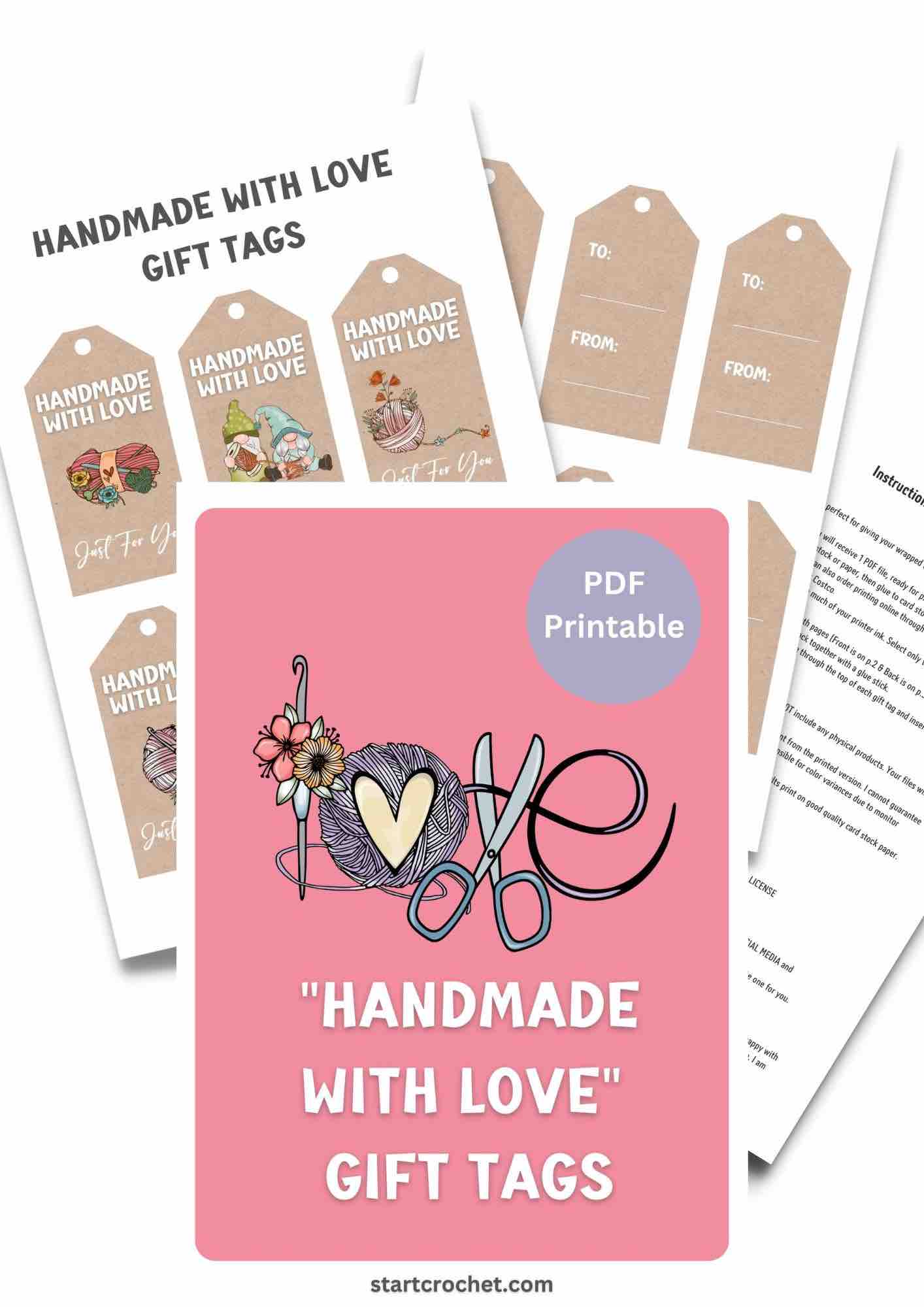 Thank you for visiting my Blog!
Here's A Free Gift For You.
"Handmade WIth Love" Gift Tags (PDF Printable)
Click the button below to download them now. 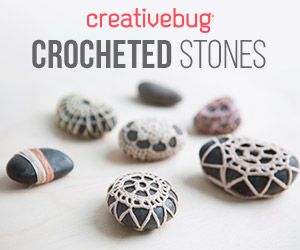 Crochet meanings can be a bit of a challenge to decipher if you're a beginner crocheter. There are crochet abbreviations, terms & symbols used in crochet patterns, then there's also crochet slang that's a whole other ball game!

Crochet slang, you ask? Did you even know there was such a thing?

If you're new to crochet and you've already been trying to figure out crochet abbreviations and symbols used in crochet patterns, you'll be surprised to know that there's a whole other world of crochet terminology used by crocheters.

Just hang around some crochet FB Groups and you'll notice some crochet slang thrown around... terms like HOTH, Frogging or Yarn Barf!

I've seen so many beginner crocheters ask questions about what on earth someone means on these FB Groups that I thought it would be helpful to put together a blog post and Free Printable (below) so you can keep these terms with you in your crochet binder for reference.

38 Crochet Abbreviations Only Crocheters Will Understand! 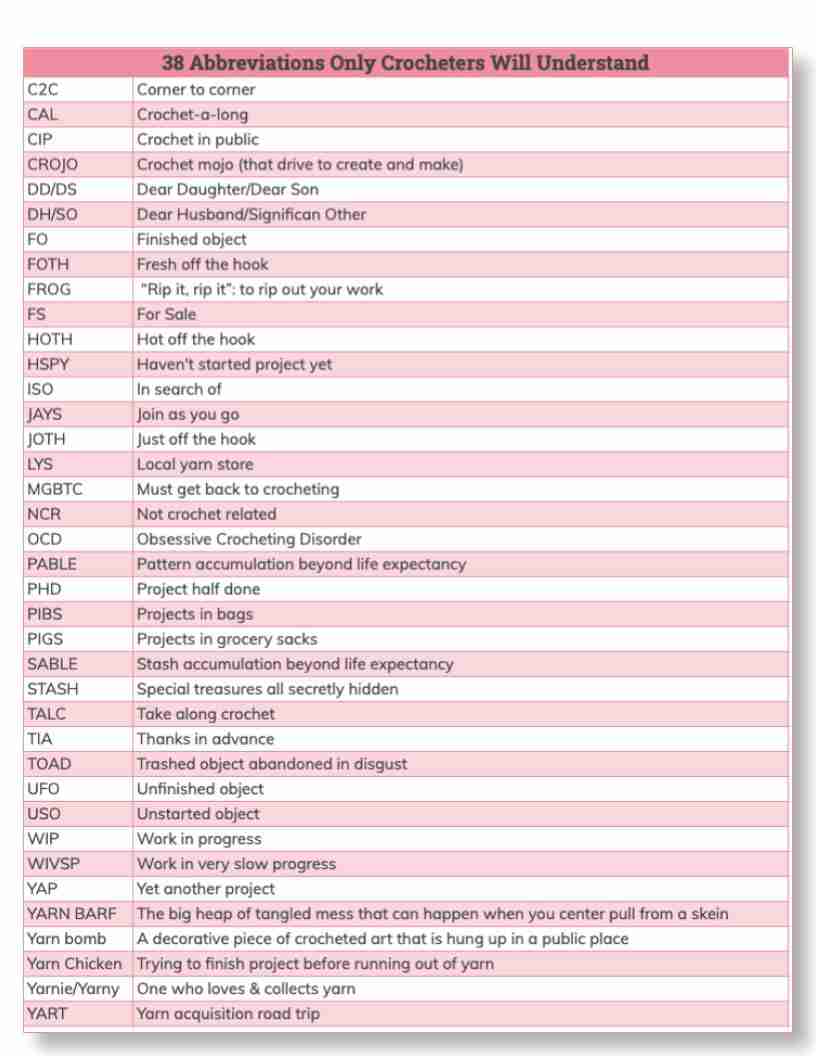 Your info is 100% secure and will never be shared.

Table of Contents
1
Crochet Meaning
2
Words Associated With Crochet
3
Frequently Asked Questions
What is a crochet slang?
What are some crochet terms?
Why is undoing called frogging? Why is it called frogging in crochet?
What are Crochet Abbreviations and Terms?
Crochet UK vs. US Terms
US vs. UK Crochet Terms & SymbolsFree Printable
4
Want to Learn More About Crochet?

The term "crochet" originally comes from the French term "small hook". The word to crochet refers to a handicraft in which one interlocks yarn with a hooked needle (crochet hook) to produce textured fabric or textiles. 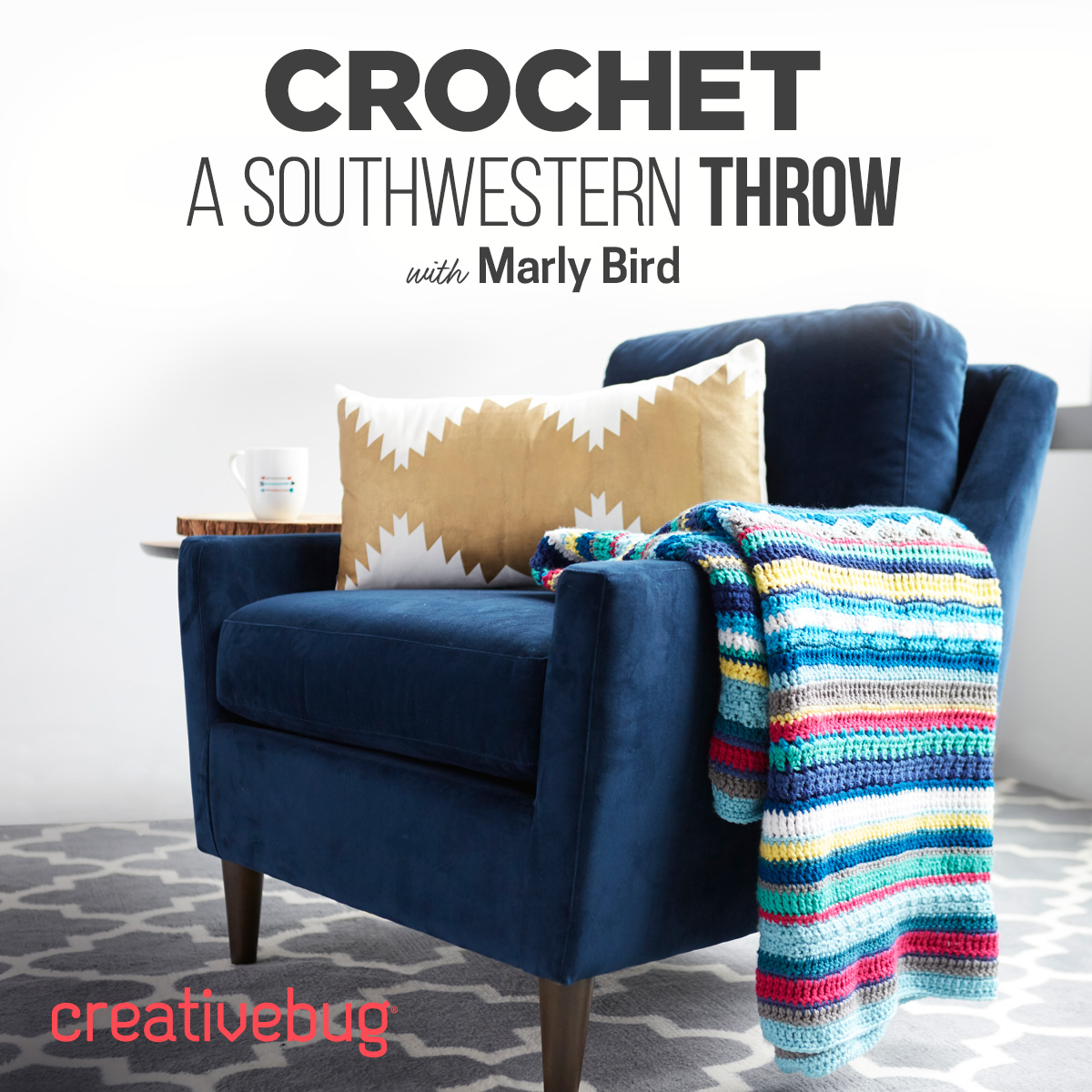 If you're keen to know what all these crocheters out there are talking about, have a look at all these funny acronyms and abbreviations of words associated with crochet in this list below (organized alphabetically):

C2C Corner to corner. This is a type of crochet technique that works up in diagonal rows. It's created using three chain stitches and three double crochet stitches that create small squares or "tiles" that connect to each other. You keep increasing each row by one square which forms your project into a triangle. Once you reach your desired length and width, then you start decreasing each row again by one square each. There are a few variations of this stitch including the  single, half double, and double crochet, the waffle stitch, the alpine stitch, mini C2C stitch, and the diagonal box stitch. 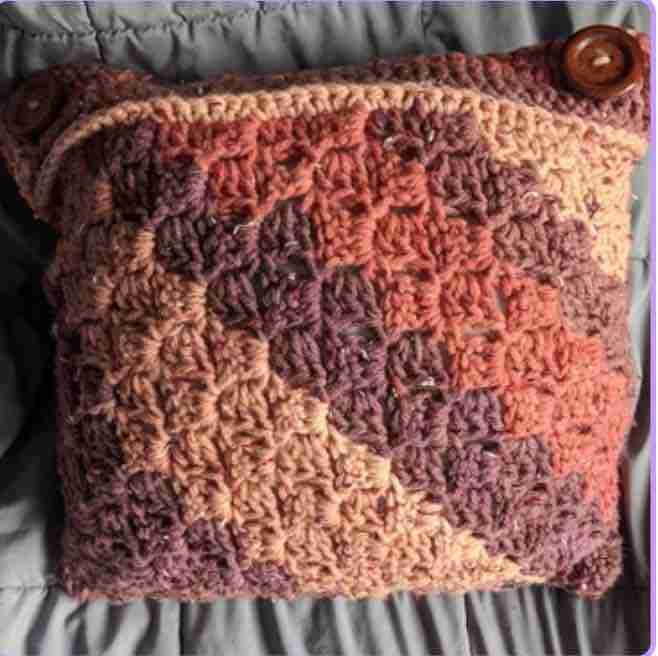 CAL Crochet-a-long (A group of crocheters from all over the world working together online on a large project at the same pace. Sometimes, a project is divided into stages and each stage is released at a specific time with the next part of pattern released every week, for example). It's a great experience where you can learn, make and share with people globally.

You can check out the Crochet-a-long by The Knitting Network here:

CROJO Crochet mojo (that drive to create and make)

FOTH Fresh off the hook

FROG “Rip it, rip it”: to rip out your work after you've made a mistake.

HOTH Hot off the hook

ISO In search of

JAYGO Join as you go, which is a method you can use to avoid having to stitch your crochet pieces together. For example, if you've made a few granny squares, then you'd join each square to the next one while you're working, not at the end. 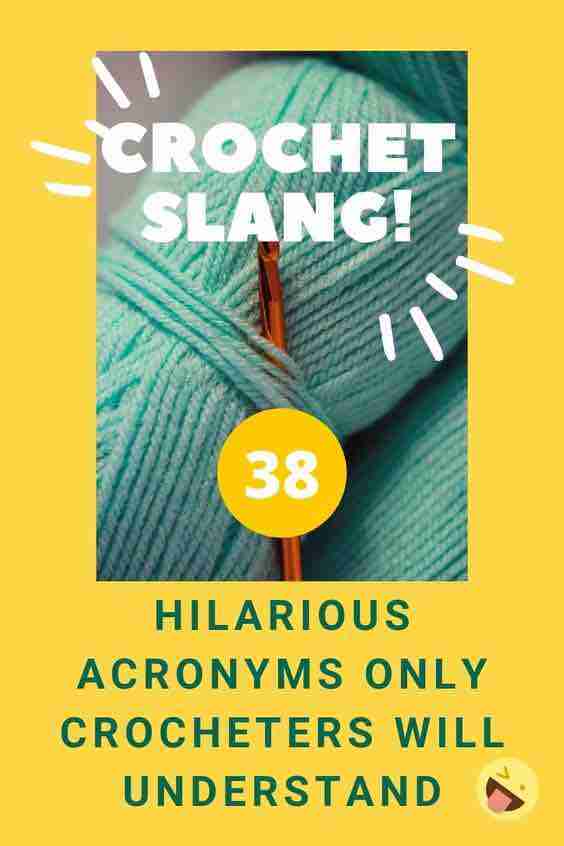 JOTH Just off the hook

MGBTC Must get back to crocheting 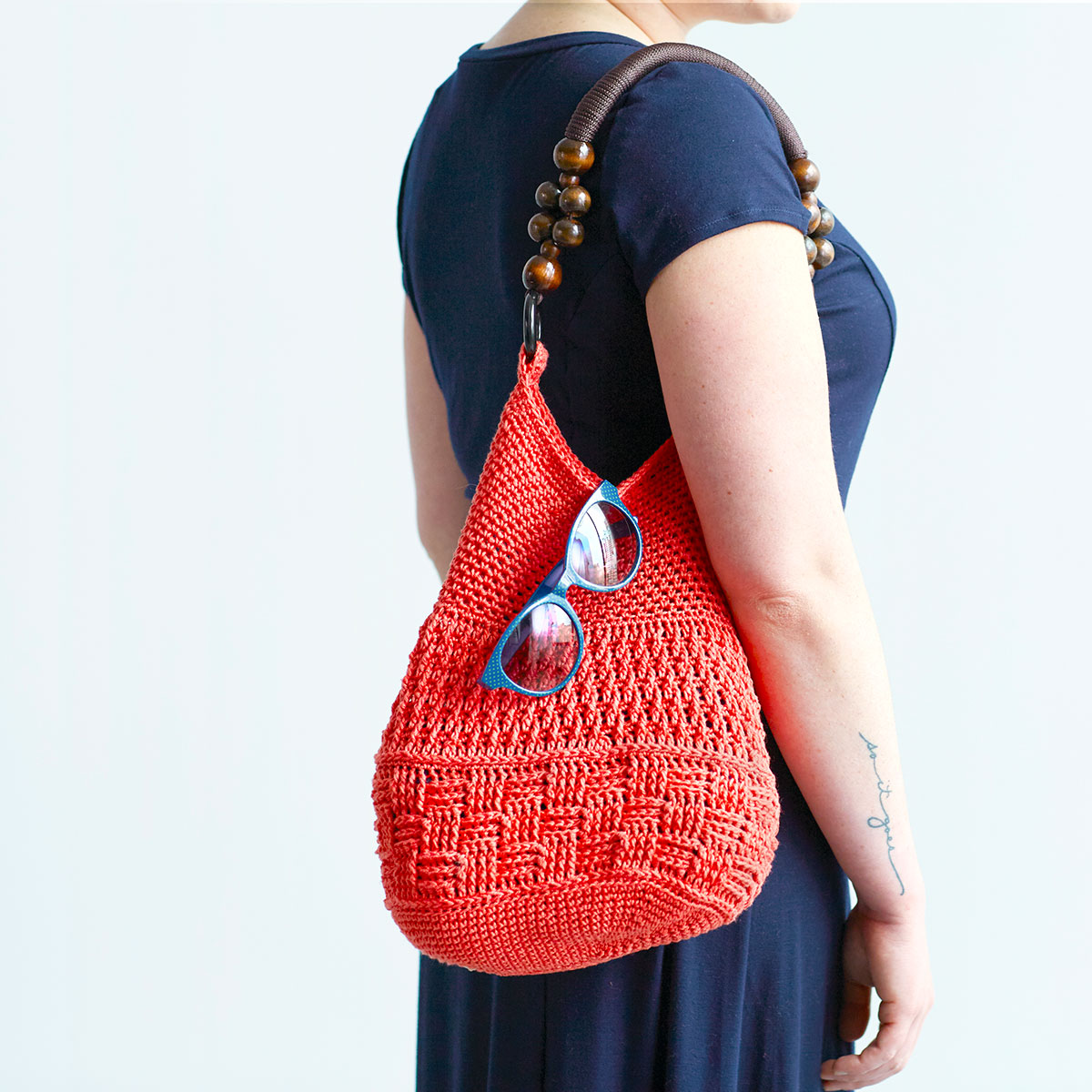 TIA Thanks in advance

YAP Yet another project

YARN Barf or Yarn Vomit (The heap of tangled mess that can happen when you center pull from a skein or your yarn just got tangled for any reason really).

Yarn bomb A decorative piece of crocheted art that is placed or hung up in a public place or a public object such as a Royal Mail Mailbox in the UK.

Yarn Chicken Trying to finish project before running out of yarn

Yarnie/Yarny One who loves & collects yarn 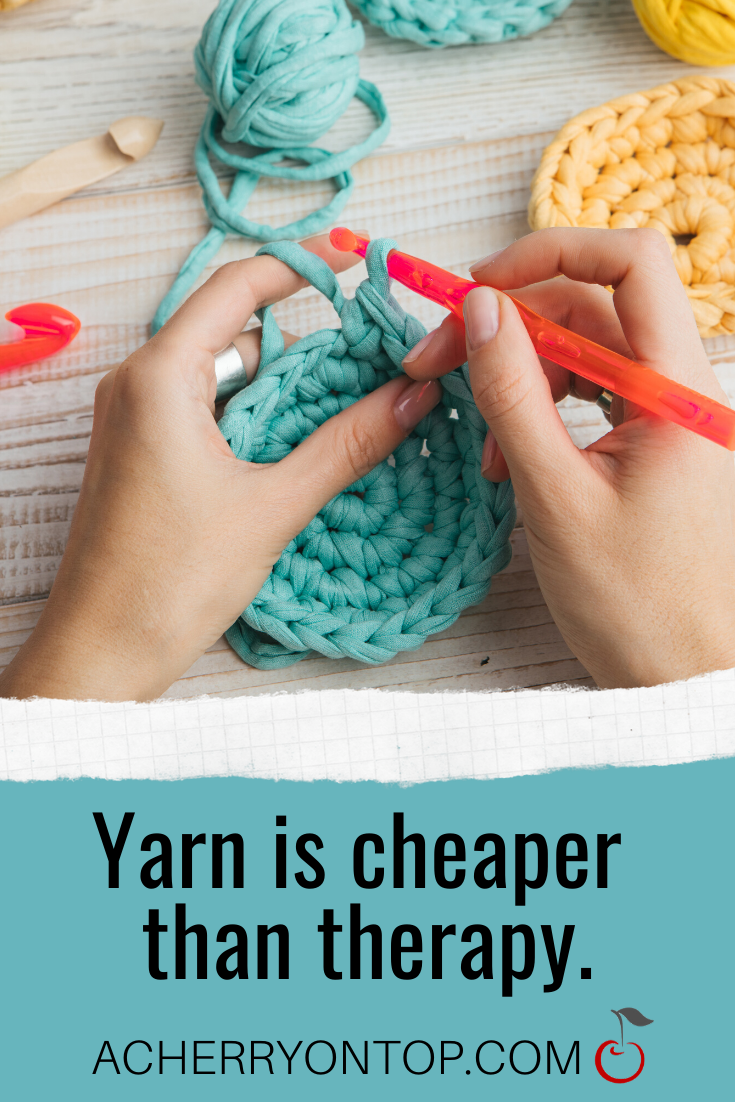 What is a crochet slang?

Crochet slang are acronyms and terms used by crocheters to refer to certain crochet-related situations or meanings. 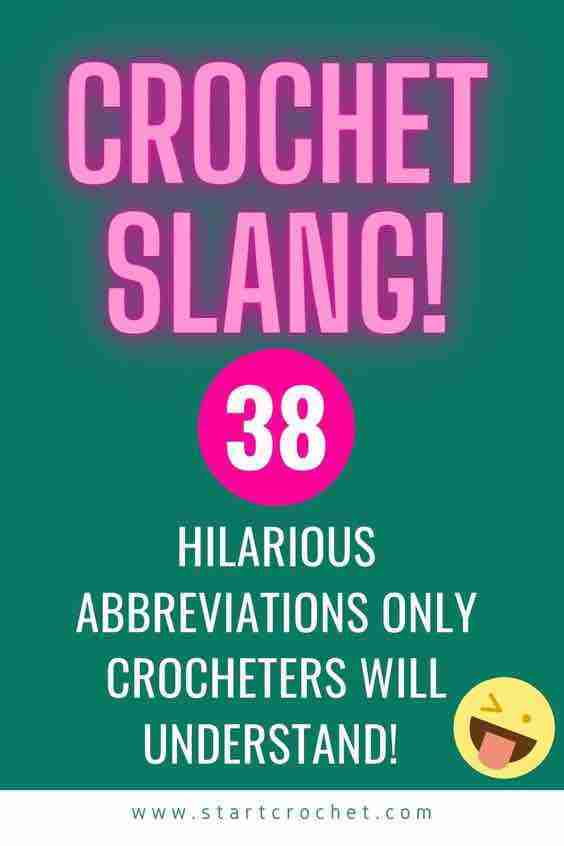 Well, if you realize you've made a mistake a few rows back or are simply unhappy with your work and would like to start over, you might want to undo your work or "Rip" you work.  While you're pulling our all your stitches you'd be "ripping, ripping" like the croaking of a frog 🙂 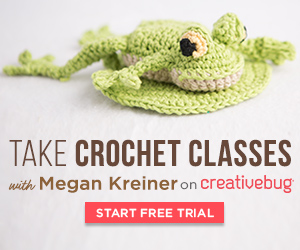 Crochet Abbreviations and Terms are the abbreviations used in crochet patterns. This is done so as to shorten the patterns and not have too much writing in it.

Normally, at the beginning of each written crochet pattern, there would be a section about the crochet terms used in that pattern. It would say the pattern uses sc (single crochet), and dc (double crochet) stitches, for example. 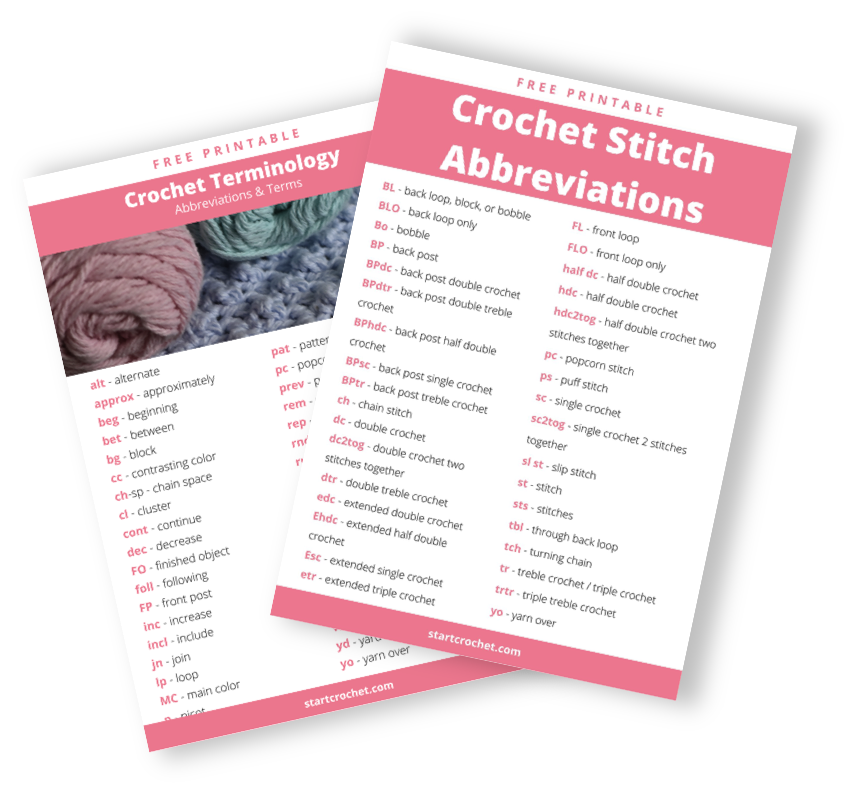 There are essentially two crochet "languages" so to speak! There is the (US) American version and the English (UK) version.

This means that the same stitch has 2 different names, depending on whether the pattern is American or English.

Normally, patterns state in which language they are written, but if they don't, then one way to know whether a pattern is written in US or UK terms is to check whether it mentions a "single crochet" (sc).

If it does, then it's a US pattern because "single crochet" doesn't exist in UK crochet terms.

Have a look at the chart below to see the difference.

Your info is 100% secure and will never be shared.

What you need to know is that a UK stitch is one stitch up from the US one.

Want to Learn More About Crochet?

I hope you enjoyed my compilation of the most popular Crochet Slang Terms. Did I miss any? Drop them in the comments below.

If you're keen to learn more about crochet, have a look at these crochet classes where you can learn crochet online! 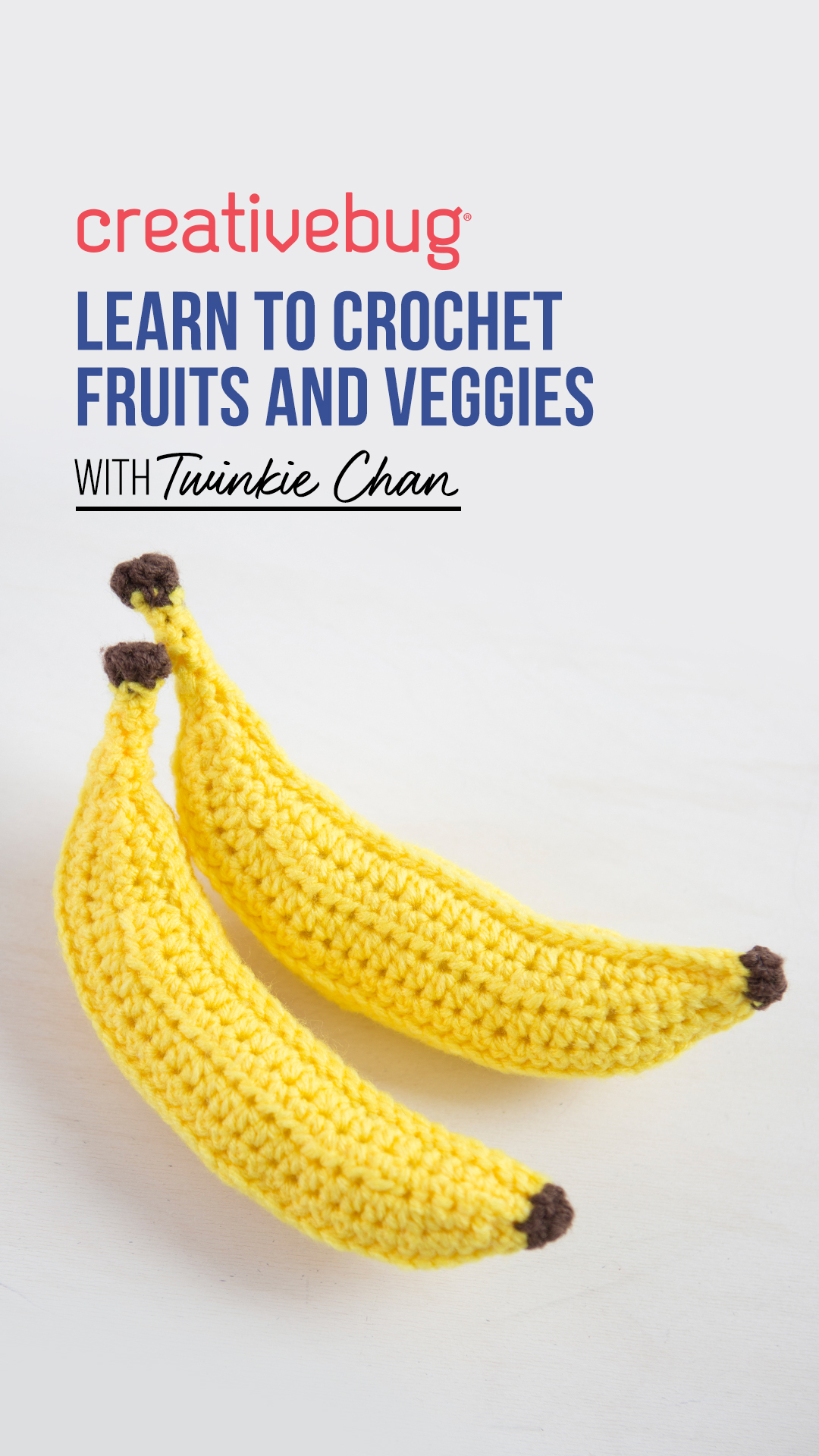 How To Crochet A Tiny Heart (Step-by-Step Photo Tutorial)

The Ballerina Scarfigan FREE Crochet Pattern: A Scarf With Sleeves

How to Crochet a Soft & Luxurious Velvet Scrunchie with Basic Stitches

Hi. I'm May! Welcome to my Blog! Here you'll find crochet tutorials and easy crochet gift ideas you can offer your loved ones on special occasions. You'll also find little crochet designs you can use for Random Acts of Crochet Kindness (RAOCKs) to help make the world a happier place for everyone.

Please log in again. The login page will open in a new tab. After logging in you can close it and return to this page.